Metinvest's steelmakers to landscape the park in Makiivka 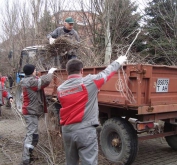 About 130 employees from 15 departments cleaned up the city park with total area of over 10 hectares. The park has not been taken care of during eight years due to other priorities. During the clean-up event the plant's workers collected garbage, cut the dry wood, cleaned the lawns and swept the pavements on the one-hectare space. The volunteers removed 85 cubic meters of garbage and huge amount of dry tree branches.

- There were many architectural forms in this park before, and it was maintained by about 30 people. Now it is not served to the whole extent due to difficult economic situation in the country. That is why we have often involved non-government organizations, schools and plant's workers to clean these territories. Of course, there is still much work to do, but Well Begun is Half Done. I am grateful to the steelworkers for their participation in the clean-up events, including those conducted during the working days. They provide the machinery and themselves take part in cleaning.

- We have planned to clean up this territory for a long time. We fulfilled this plan partially and we will do it in future to the best of our abilities and whenever possible.