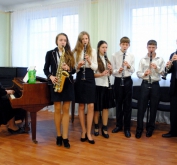 Yenakiieve Iron and Steel Works supported the participation of the Sunny Clarinets, a junior woodwind ensemble, in an international music competition in Prague (Czech Republic). They honourably represented Ukraine and took third place.

This was the first time the young musicians performed abroad, which is why they found European Talent, the competition in Prague, difficult but interesting. Participants in the competition included 60 bands from Ukraine, the Czech Republic, Finland, the Baltics, Spain, Russia and Kazakhstan. The judges listened to more than 120 members of bands and individual soloists. According to the program, the Sunny Clarinets performed two music pieces: "Lyrical" by Luigi Creatore and "Capriccio" by Yuri Saulsky. The performance was successful, even the judges applauded the band from Yenakiieve. After the competition, many in the audience, other participants and judges emphasized the high level of competence of the Yenakiieve band and awarded them third place. It was a great honor for the band to be among the best performers and participants in the gala-concert.

"It was our great honor to represent Ukraine at the prestigious music competition," says Ivan Simutenko, leader of the band, on behalf of the team. "This trip became possible only because of the support of the important enterprise of Yenakiieve. We would like to thank Metinvest Group and in peculiarly, General Director of Yenakiieve Iron and Steel Works Aleksandr Podkorytov for their care for the younger generation and for the opportunity for our children to show their talent at the European level."

The results were the work of young clarinet players Filipp and Sophia Dmitrievy, Ivan Bezsmertny, and Nastya Vinnichuk, and saxophone player Darya Naydionova under the leadership of Ivan Simutenko and Galina Sukhacheva (concertmaster). The participants believe they will always remember this trip. In addition to their performance, they toured the Czech Republic and Germany and visited historical places in Western Europe.

The Sunny Clarinets from the Petro Tchaikovsky Yenakiieve School of Arts became a member and participant in a young talent competition in Svyatogorsk last fall with the support of Yenakiieve Iron and Steel Works.