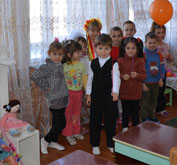 Yunokommunarovsk has three preschool institutions. Kindergarten #23, housed in an 83-year old building, had been in need of heat insulation for quite a while.   In this time, the windows had never been replaced and the temperature would go down to below 18°C in the winter. Kindergarten #23 Rector Olga Korolyova-Stenyuk said the new windows would keep students warm and cozy. In total, 90 students attend Kindergarten #23.

"Our pre-school institution was built back in 1930 and the wooden window frames have not been replaced since then.   We still had complaints about the low temperature last year, but not anymore.    Now, the temperature is 25°C even during snow storms," said Olga. "We thank the mayor and Metinvest Group for this generous gift."

The energy saving "replacement of windows at Kindergarten #23 in Yunokommunarovsk" was executed as part of the 2013 social partnership program with the Yenakiieve City Council.   The document was signed by Mayor Valery Oleynik, Metinvest CEO Igor Syry and Yenakiieve Steel's General Director Aleksandr Podkorytov.

More than 20 large-scale social projects, for a sum of UAH 7.2 million, have been implemented together with Yenakiieve agencies and the local community during the year as part of the program. These included upgrading a water source in a village that dates back to 1905, renovating the wards at outpatient clinics #4 and #5, purchasing buses for the IT lyceum, and energy saving projects focused on the installation of windows at a kindergarten of educational institutions #15 in Yenakiieve and #19 in Korsun.

"These projects make sense to all parents. Kids spend most of their day at the kindergarten. Here they grow, become stronger, and explore the world around them," said Aleksandr Podkorytov, Yenakiieve Steel's general director. "We will continue to support preschool institutions. A large-scale project to construct playgrounds and playrooms at each kindergarten in Yenakiieve will be executed next year."

Valery Oleynik, Yenakiieve mayor: "We put in heat insulation, renovate buildings, and, more importantly, take actions to increase the capacity of the kindergartens. We launched additional groups for 86 kids during the year. This is a good indicator for Yenakiieve. Today, I would like to thank Metinvest for all of its investments in our future."