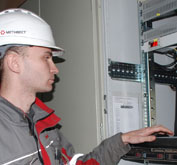 Metinvest Group's Yenakiieve Steel is continuing to modernize weighing equipment. Electronic strain-gauge scales were installed in the BOF Shop of Yenakiieve Steel to increase the accuracy of iron weighing before charging it into BOF to improve steel quality.

The program to modernize the weighing equipment at Yenakiieve Steel was started five years ago. Since then, several weighing facilities have been upgraded at various process stages, which have enabled a reduction in the time to load railcars, a decrease in the time motor vehicles spend at checkpoints and the elimination of the overloading of railcars, which has reduced the volume of rejects during loading.

Investments into the modernization of weighing equipment have amounted to USD 970,000. In early 2013, the large project "Replacement of the Weighbridge at CCM #1" was implemented, involving investments of USD 160,000. Currently, the enterprise is implementing the project 'Upgrade the Weighing Equipment at the BOF Shop Mixers," involving investments of USD 325,600. Electronic strain-gauge scales have already been installed at Mixer #1. Their accuracy is five time higher than those of the outdated balance scales. With the commissioning of the new equipment, the BOF operators obtained a reliable tool for controlling iron and blending materials before charging into the BOF for further steel-making.

The modernization of the weighing equipment will have a positive effect on Yenakiieve Steel's entire production process.

"Improving production efficiency is a key task of each structural unit of the plant," said Aleksandr Podkorytov, general director of Yenakiieve Steel. "One of the solutions for this task is to upgrade the weighing equipment, which enables accurate registration and control to reduce costs and improve quality of products."