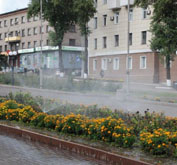 A grant from Metinvest Group's "We Improve the City" social program was used to install a quality, modern sprinkler system in the central G. Beregovoy square in Yenakiieve.

Employees of the Green Property utility company of the Yenakiieve City Council initiated the project. The project’s total budget, paid for by the city administration, Metinvest Group, and Yenakiieve Steel was more than UAH 51,000.

The sprinkler system will supply water to flower beds along the Alley of Heroes, Lenin Square, and green spaces in the G. Beregovoy garden.

"Cooperation between the city and the plant has very favourable for us,” said Evgeniy Eremchenko, head of Green Property. “Our trees have been suffering without centralized irrigation, and it is very difficult to even evaluate the benefit of this system. Now we are working on a new project to supply water from the centralized irrigation system to Lenin Avenue. This will make the city more beautiful, be good for the plants and looks good to eyes."

The irrigation system has been blown out and is now sealed off until spring. It will be switched on in April.

The "We Improve the City" grant program is part of the social partnership agreement between Metinvest Group, Yenakiieve Steel, and the Yenakiieve City Administration. This program was launched in 2011. Eight social projects, which received grants totalling UAH 520,000, were implemented in Yenakiieve through the program in 2011-2012.

Yenakiieve is one of the greenest cities in Donetsk region. It planted 150 roses, 400 chrysanthemums and about 900 ornamental trees – birches, rowan trees, bird cherries, ailantuses, lilacs, staff trees and thujas in 2013.