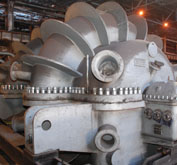 The turbine and compressor unit will be the most powerful of its kind at the plant; its capacity is 5,500 cubic meters of air per minute. It was built by the companies that installed a similar unit at Blast Furnace #3. The equipment will be supplied by ČKD Nové Energo (Czech Republic); the automated process control unit was made by Siemens (Austria). Civil works were performed by Spetsenergomontazh (Ukraine).

Installation of the unit’s steel structures (platforms, stairs, and other facilities) and reconstruction of the electricity supply unit is still in progress. Relevant infrastructure is also under construction, including a recycled water supply system and process-related sewage system.

The USD 22.6 million project is being implemented as part of Metinvest Group’s initiative to modernize its enterprises, according to its Technological Strategy.

EMZ’s three blast furnaces have been receiving blast air from five turbine blowers, whose output is not sufficient to operate the blast furnaces; three of these blowers are obsolete.

Blast air is compressed air enriched with oxygen and hydrocarbon fuel fed into a blast furnace. The quantity and stability of blast air pressure affects the productivity of a blast furnace.

Turbine and compressor units feed blast air into the blast furnace and are an important component of blast furnace production. Interruptions in blast air supply for more than two days can lead to the suspension of hot metal production, furnace cooling, and the destruction of the furnace.