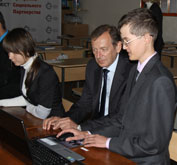 The schools that received new laptop computers were Makiivka’s Lyceum #1 (14 computers), Makiivka’s City Lyceum (15 computers) and Yenakiieve's Educational Complex #2 (10 computers and a multimedia unit). The laptops came installed with Microsoft Office Standard 2013 Russian OLP NL Academic software. The classrooms were also equipped with Wi-Fi. The new equipment will be available for use by 1,500 schoolchildren ranging from 6 to 16 years old.

"Low computer access in schools prevents the development of innovative education,” said Sergey Zuyev, vice-principal of curriculum and discipline at the Makiivka City Lyceum. “Today, information technology is developing rapidly and existing equipment in our informatics classrooms was outdated and did not meet modern requirements. This gift from Metinvest will help us learn programs like Photoshop, Сorel, and other office software. Now we have the most powerful computers and the best connection in the city."

Metinvest's provision of modern computers to schools is part of the national "Open World" project to develop IT education in schools.

"Life at our enterprise is becoming more automated,” said Aleksandr Podkorytov, Yenakiieve Steel general director. “Blast furnaces, converters, and many other machines are equipped with modern process control systems. New objects that are being constructed at Yenakiieve Steel including the sinter plant, pulverized coal injection plant, and new oxygen complex will be state-of-the-art. Obviously, we will need qualified personnel to operate these facilities. That is why we are very interested in training our potential employees. And training the young generation is easy and fast since they are so quick to pick up on the latest innovations."

The educational establishments received the new laptops as part of the project "Development of Information and Communications Technology in Schools." This work was in line with the cooperation agreement on the social and economic development of the city of Makiivka in 2013.

Metinvest Group is a vertically integrated group of steel and mining companies that manages every link of the value chain, from mining and processing iron ore and coal to making and selling semi-finished and finished steel products. It has steel and mining production facilities in Ukraine, Europe, and the US, as well as a sales network covering all key global markets. The major shareholders of Metinvest B.V. (the holding company for Metinvest Group) are SCM Group (71.25%) and Smart-Holding (23.75%), which partner in the Group’s management.