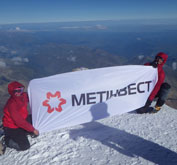 At 9 a.m. on August 14, 2013 Yenakievo climbers reached Mount Elbrus which is the highest peak in Europe of 5 642 meters high, bearing a handful of native soil and flags of Metinvest and Yenakievo with them. Today the rock climbing team from Yenakiieve Steel, Metinvest Group, has got back home safe and sound.

The honor to get the Elbrus Peak was entrusted to three leaders of the team comprised of 10 members. They were BOF Shop worker Ivan Trofimov as a Head of an expedition, Foreman of Social and Community Services Administration Vladimir Gorbashev as the initiator of an expedition and Vladimir Vostricov as the elder of Yenakiieve Steel Hiking Club.

The starting camp was set up at the height of 4 300 meters. The assault climbing team has managed to reach the peak in 6 hours despite severe weather conditions (-20оС and blizzard) demonstrating a good performance.

- It was cold, but we’ve got strong motivation. We have been bearing the upmost symbols of the town. Moreover, we recognized that our relatives were worrying about us at homes. Thus we had no right to retreat, - said Ivan Trofimov when came back home.
Anatoliy Trofimov, being the most competent member of the expedition with 40 years of rock climbing experience, concluded that all the 10 members have got through the test with tough weather conditions successfully. It should be mentioned that two girls joined the team. They were an engineer Olga Lobas and an accountant Olga Fediayeva. The team has taken over 10 acclimatization hikes to the glaciers and peaks in the Vicinity of Mount Elbrus prior to start the expedition.

- We are proud that our young workers are focused on such kind of projects and that we have brave and committed people working here, - highlighted Alexander Podkorytov, General Director of PJSC Yenakiieve Steel. – We are going to support this undertaking.

It should be reminded that the idea of climbing to Elbrus Peak sprang a year ago. The workers made out a project named “Metinvest Symbols at Top Peaks of the World” and submitted their proposition to Yenakiieve Steel Management. The undertaking had a respond. The Hiking Club was provided with all the necessary equipment. Currently the Club members have available high-quality climbing equipment as special shoes, sun glasses, storm suit, thermal underwear, climbing harness, quick links and ropes.

The team have been steadily preparing to the expedition for a long time. Ivan Tofimov, who headed both training sessions and expedition itself, started the regular trainings since January. He was also the one to draw up the expedition rout.

- We have got an idea to plant Metinvest Group Flag to the peak as a symbol of its leadership in any business and initiative, - says Vladimir Gorbachev, Foreman of Social and Community Services Administration and Head of Hiking, Rock and Mountain Climbing Club in Yenakievo. – We have done that to support our colleagues, who are currently forging the future of our town at the Works and to show appreciation to the hard work of steelmakers.

- I am glad to see that these guys revived the tradition of rock climbing section, which had been existing at our club for a long time, - highlighted Viktor Verkhovod, the 71 year old elder of hikers and the veteran of Mechanical Shop.

Yenakievo hikers devoted the Elbrus expedition under “Metinvest Symbols at Top Peaks of the World” Project to the 70th Anniversary of Yenakievo Liberation from Fascist’s Troops and the 40th Anniversary of Hiking Club at Yenakiieve Steel.