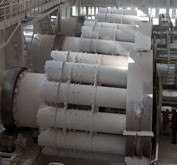 According to Q1 2013 results, the best fuel and energy saving and efficient usage projects have been rated at Yenakiieve Iron and Steel Works. In total, during January- March period, Works has been implemented 42 energy saving projects with overall economic effect amounted to more than UAH 8.8 mln.

The best energy saving project within Q1 is the development of natural gas consumption saving method at ignition torches of gas-collecting devices in Gas Shop. The project authors are Dzhafar Dzhafarov and Roman Nosachev. From the beginning of the year the economic effect from the implemented proposal has amounted to UAH 1.5 mln.

The second place is occupied by innovators from Lime and Refractory Shop: Yuriy Prokhoda, Anton Lysak and Igor Nazarevskiy, who proposed to use frequency controllers on kiln loading chutes. Having eliminated irrational use of natural gas, this Shop will save half million hryvnas within the year. Third winner is the Oxygen Shop team, consisting of Vladimir Malyutin, Aleksey Ovsyannikov and Yuriy Zavertkin, who presented Power saving project. Fourth place is taken by Maksim Karpukhin, Aleksey Degtyarev, Sergey Melnikov and Olga Shaboldosova with their development of steam losses reduction and steam load decrease proposal at Yenakiieve Steel Boiler Shop. All the authors have been rewarded with money prize in amount of UAH 5 - 10 th.

Such quarterly rating is being compiled within the framework of Energy resources saving programme, which is being consistently implemented by the Works during several years. The programme objective is to cut production costs against utilities value appreciation. The energy saving programme, implemented at Yenakiieve Steel in 2012, resulted in saving of 8.5 mln. cbm of natural gas, 17 kJ of thermal energy and 190 mln. kWh of power. Furthermore, Yenakiieve Steel succeeded to save 246 th. cbm of water from natural sources.